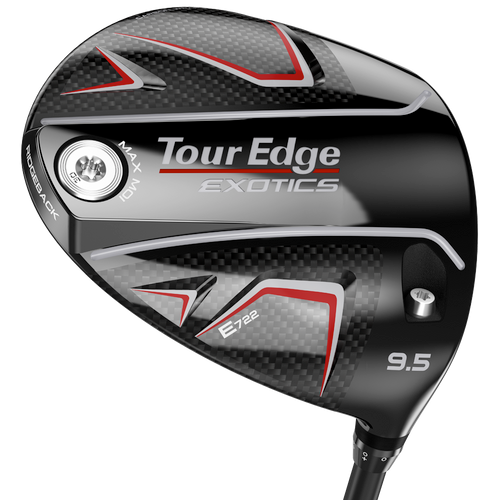 This ultra-premium 460cc profile designed for maximum forgiveness takes M.O.I. to the absolute extreme! The E722 Driver features an M.O.I. boosting 30-gram Back Weight, while bringing the ultimate in power, feel and forgiveness through Tour Edge’s breakthrough Ridgeback™ and Diamond Face VFT ™ technologies.

30-Gram Back Weight - An extreme weighting design features a 30-gram weight at the extreme trailing edge on the sole of the clubhead. The E722 Driver’s extreme low-rearward CG position produces an extremely high M.O.I. that is 18% higher to increase stability at impact and tighter dispersion. This equates to a top Moment of Inertia rating in a driver in golf: a 5500 g/cm2 M.O.I. rating.

Ridgeback Technology - Ridgeback Tech is a power producer. This Ridgeback spine acts as a brace to produce more power across the entire face, including the extreme perimeters. TE engineers created a 20% thinner Ridgeback with increased structural properties and a Ridgeback Sole activation for the E722 Driver. The spine runs from the center of the face through the crown and wraps around the head to connect with a newly designed sole plate.

Ridgeback is designed to create superior feel at impact. The extra rigidity created by the brace through the crown produces a much stronger feel at impact and results in a crisper and brighter feel at strike.

Carbon Wrap Tech - Carbon Wrap technology replaced extra Titanium from the crown and sole with an extreme wrap-around design that features 34% more carbon fiber. These weight savings have been re-purposed to create the optimal CG location, allowing for greater face flex in the heel and toe so off-center hits achieve greater power.

The face thickness of the new Diamond Face VFT is thinner and extends further out to the heel and toe of the clubhead, dramatically increasing ball speed on off-center hits while also greatly aiding forgiveness on these strikes.

Adjustable Hosel - The adjustable hosel allows golfers to adjust the loft +/- 2 degrees and lie angle through a range of 3 degrees.

SpeedTested Shafts - Every shaft in the Exotics 722 Series has been SpeedTested to find the optimal custom shaft pairing for every flex, determined by robotic testing, and validated by player testing.